Strangled To Death - By a Fig?

Think of a fig, and you're probably thinking of the somewhat unpopular fruit eaten by the intestinally-challenged. You're not thinking 'slow death my strangulation', right?

The Ficus genus contains numerous plant species, including Ficus carica, the common fruit fig, a completely harmless and well-behaved tree. Some fig species, however, are the most unforgiving and brutal murderers you could think of! There are several types of 'Strangler Figs' actually, but the true figs fall under the Ficus genus. Many completely different plants, including some vines, are called 'Strangler Figs' but are mistakenly labeled as such.


They commit their foul deeds by means of buttress roots - roots that grow from branches high above ground and extend to the ground below where they root themselves to take up water and nutrients, and to help stabilize themselves more securely. It goes beyond that too though... In the dark recesses of the plant world, Strangler Figs are cunning bringers of death in the slowest fashion possible.

Let's say that we, a Strangler Fig, have just produced seeds in the dense, overcrowded forest in which we live. Competition in a lush forest like this is intense, and the biggest fight is simply for light. Starting life under the canopy of the trees is a dark and trying way to begin life and many saplings never make it. They wait and wait for a tree to fall and then take advantage of the gap, should the opportunity ever arise, and it often never does. 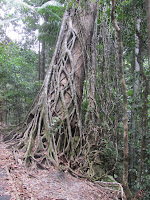 Continuing on, these Strangler Fig seeds were ingested by a bird who flew a few kilometres away and deposited it kindly for us in the crevice of a rival tree high up in the canopy. Our offspring then begins to grow and starts sending down buttress roots dozens of feet to the ground below. Once the first root breaks ground, more roots begin growing, and more and more. With the added elevation, the sun exposure is far greater and the Strangler Fig takes off!

Over the next many months and years, these buttress roots continue growing and multiplying, eventually surrounding its host almost completely. Up top in the canopy, the Fig has started outcompeting the host tree for light and stressing it. Being unable to expand any further, the host tree eventually loses its ability to take up water and nutrients, and eventually it is strangled to death. The host tree will continue to stand, probably for years, but eventually it will rot away leaving a hollowed out Strangler Fig with an unusual network of roots forming the trunk. 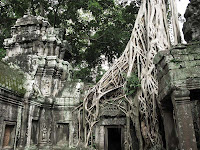 Strangler Figs are not only brutal, but they are resourceful. They take advantage of whatever vantage point they can to reach the sun, and can often be found covering inanimate objects such as rocks, cliffs or buildings. There isn't much that the Strangler Fig won't attempt to overtake, but thankfully people haven't appealed to them just yet.

NEXT BLOG - Death by dew? Or so it seems. This little plant has perfected serial killing with minimal effort and manages to feed itself by murdering insects!

Sundew - Serial Killer, How Dew You Dew The Things You Dew?